Opinion: Students Vaping Even When They Know the Risks 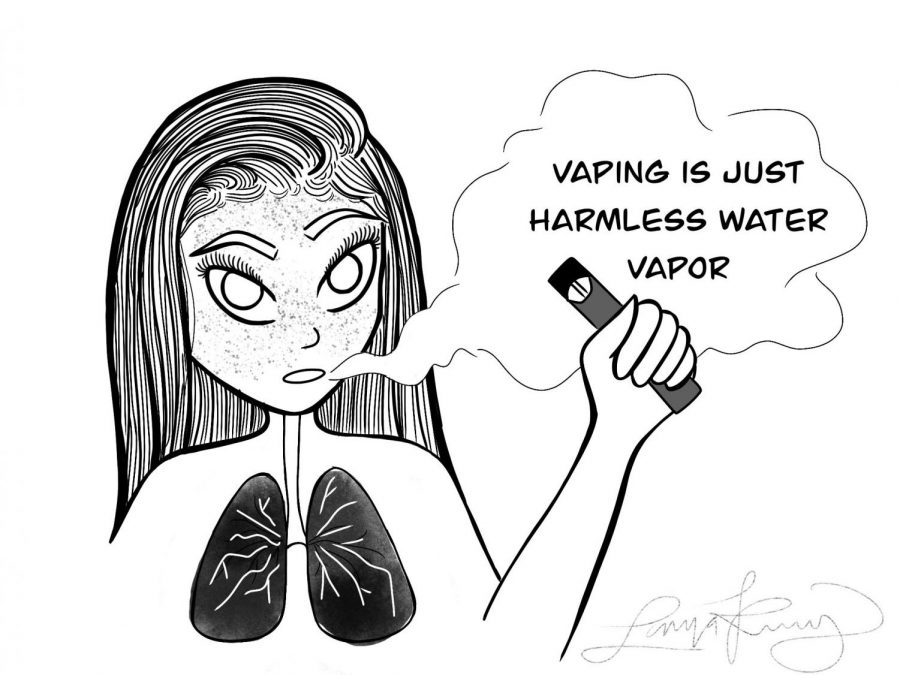 Vaping appeals to both adults and teens; however, vapes are more attractive to teens than cigarettes in America today. The reasons most people decide to vape are plentiful: fun flavor choices, thought to be safer to use, can use indoors, and social image. Vapes attract more to teens than cigarettes because of the fun flavors and to “look cool.” While cigarettes are more dangerous than vapes, vaping can still cause serious bodily issues or even death. Yet, it is easier to convince people to vape because there has not been a huge release about how they can be as bad as cigarettes. Also, because some vapes can come in small devices, they are easier to use indoors because the smoke is not as prominent as it is for a bigger vaping device or regular cigarettes.

Even though vaping is often seen as “harmless”, many cases are starting to appear with negative health effects linked to vaping. They may not be as harmful as traditional cigarettes are proven to be, but there are still long term effects that people need to consider. According to Kathleen Raven of Yale Medicine, “A patient in Illinois has become the first to die from a severe lung disease that may be tied to vaping, according to the Centers for Disease Control and Prevention (CDC).” Lung Illnesses, chest pain, shortness of breath, fatigue, and fever have been some of the most common effects of vaping, and these aren’t even including the long term effects. Research is still being done on vaping, and, in time, more harmful effects will come to light.

The numbers are startling. More than 3.6 million middle and high school students currently use e-cigarettes, according to the latest National Youth Tobacco Study. Another national study last year, found that 11 percent of high school seniors, 8 percent of sophomores, and 3.5 percent of eighth-graders vaped with nicotine during a previous one month period. At Platteview High School, 141 students took an anonymous survey about vaping. One question directly asked if the student vapes. Thirteen students out of 141 said they do in fact vape. Additional questions asked if students are aware of the serious health issues or possible death related to vaping. Only one person out of 141 students said no. It can be inferred then that the majority students who vape still do it regardless of the effects.